the highs and lows of my kitchen efficiency…

I went grocery shopping for the first time in at least 3 weeks last night, so they are, actually, not bare. They weren’t exactly bare prior to the grocery shop either, because I can’t help but buy canned goods when they’re on for a good price (thanks Dad). I preplanned my meals for the next two weeks, though, so I avoided the temptation of buying a huge amount of random things in hopes of them coming together in some mystic ball of glory.

Last time I went grocery shopping I got, amongst other things, bread flour, an ENORMOUS round of brie and two sweet potatoes. I had plans for baguette with brie that disregarded that I am a person who lives alone and maybe shouldn’t have cheese sandwiches for all meals for three days.

They were delicious though.

On Sunday I peered into my fridge, hungry – condiments and pickled things, half a giant brick of brie and some very very sad celery.

My freezer – frozen veggies and fruit… and two tupperwares full of chicken bones (thanks Dad!). I put a pot of bones and water on to simmer, and added some celery.

I am aware that I described a decently stocked cupboard (didn’t even list it all – it’s called dramatic effect). I just didn’t want any of it. stomps foot. I also didn’t want to grocery shop, order in or go pick up takeout. Stomach, thou’r’t a fickle beast. I ate crackers and cheese and agreed that I should go grocery shopping on Monday.

On Monday, I… did not go grocery shopping. I did not want to. stomps foot. I am transforming into a recluse, going into public places is not the fun.

If preplans two weeks of breakfast, lunch and dinner is my Dr. Jekyll… my Mr. Hyde is googling “Sweet potato + chicken stock?”, rejecting all the recipes that I actually have all the ingredients for and then subbing things out that are sort of the same ish, but not.

Nice homemade chicken stock… salvaged shallots… celery… promising. Peanut butter and gochujang sauce. Bam. So maybe it turned out more Korean? It might also be very likely that it doesn’t fit any cuisine style outside of Mr. Hyde’s. It has been actually quite tasty, no complaints.

Dr. Jekyll is back in control again, though – I’ve got soup and salads and slow cooker beef and quiche and salmon planned, and have pre-prepped most of the vegetables for storage purposes. It’s gonna be niiiice.

Hopefully in two ish weeks, Mr. Hyde has an idea for a tuna chickpea combo. Maybe hold the peanut butter.

This week for Write on Edge’s Red Writing Hood, they gave us a short poem by Robert Frost to inspire 450 words.

We dance round in a ring and suppose,

But the Secret sits in the middle and knows.

Go on over to read more submitted responses, or to give your own!

Let me know what you think of this.  It isn’t attached to any of the other short stories I’ve written.

This photograph is by MD-Arts on DeviantArt.  He has a collection of amazing fire shots, this one using a two metre long flaming rope.  Check out his site to see more of his work, including more amazing fire art, as well as some beautiful nature shots and adorable kittens. 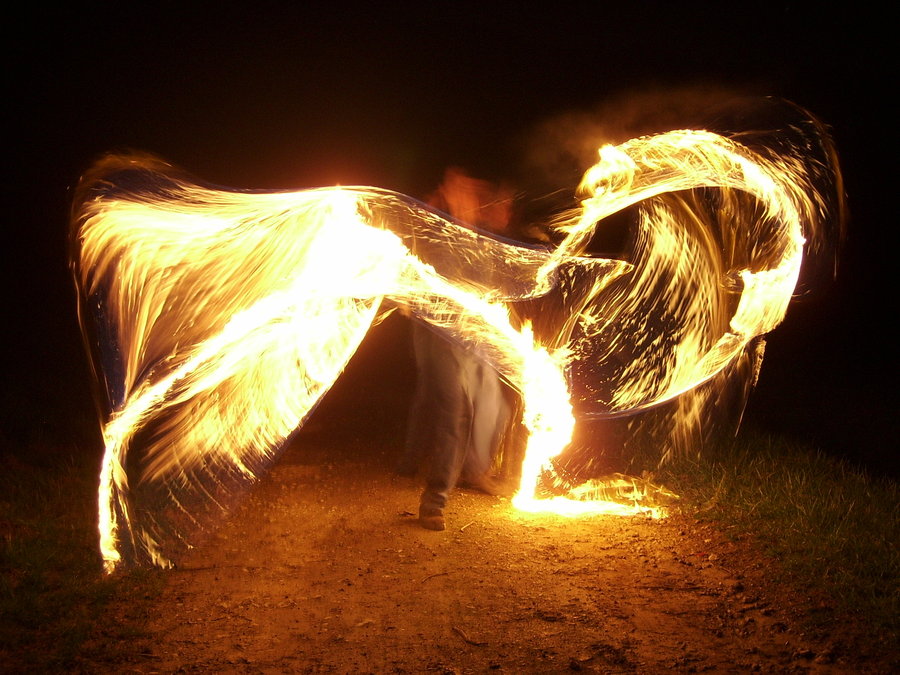 Light like a bonfire, flickering, crackling, shadows all around, smoky and unreal… Rachel swayed as dizziness and nausea washed over her, the confused jumble of images from that night assaulting her senses, burning her lungs.  She choked back the gasp of pain at the memory of a memory, hoping none in the kitchen had heard her.

“She saw them – she danced with them, you all saw her!”  Her Aunt Bea sounded worn down.

Spinning and leaping, shadows flickering against shadows… so much music.  Not music.  Fire.  Her body felt overheated, her feet throbbing painfully in time to unheard music.

Rachel’s mother sounded like she’d been crying.  “What difference does it make?  She’s too young, and that’s all there is to it.  Just leave it be.”

“We only use age as a factor because most have stopped showing signs, and even if they do, they’re about the right age anyways.  We can’t just leave it be.”

“She doesn’t even remember it!  She might never.” Her sister.  Rachel scowled angrily – of course they would let Rebecca be involved!  And, of course, Rebecca was all for keeping her in the dark.  “I think it’s better if she’s allowed to forget, poor thing, it must have been terrifying.”

A short bark of harsh laughter from her usually cheerful aunt.  “Careful, girl, you’re looking a bit green.  Most never see, and none in the past three generations have danced!  You’re only sixteen, you still might see.  If you do, you’ll understand why your sister needs training now.”

Rachel smiled, gratified that someone could see through her perfect sister’s sickly sweet mask.  It seemed that the main argument was now only between her mother and aunt.

“For god’s sake, Bea – you were considered an early bloomer, and already seeing at eighteen!  She’s only a child, she can’t keep this kind of secret yet.”

“She won’t be able to cope with this on her own!  She has been chosen to flame, and that cannot be undone.”

Chosen.  The word struck like a mallet to a gong, reverberating and echoing through her skull.  She remembered a face – bewitchingly beautiful and terrible.  Words tolling like bells, without meaning but so important.

She collapsed into the door, swinging it open with a slam as she came to her knees on the cool slate of the kitchen.  The fire in the hearth roared in welcome.

The women stared in horror at the baby of the family, soft round cheeks traced with blood red tears.

With more ferocity than she thought she had in her, she snarled, “Tell me the truth!”

The elder Maari shook her head sadly as Rachel’s mother sobbed.  “It’s too late for secrets, now.  She is born of the flame.”

Translation – borrow, but give me a bit of credit, and don’t try to claim it as your own.

Also, if you’re wondering where I got the pictures I use on my blog, click on them – if it just opens to itself, it’s mine. If it comes from somewhere else, it will take you to that site. If you take a picture from my blog, please link back to its original owner, not just my site.